Over 300 students, aged from 7 to 19, dance in Šiauliai Didžvaris gymnasium and Jovaras secondary schools’ folk dance ensemble „Šėltinis”. The ensemble will celebrate its 30th anniversary in 2011. The repertoire is dynamic, diverse and lively and dances, songs and music are selected carefully. „Šėltinis”‘ dancers enchant the spectators with emphasis on ethnicity, stage manners and promotion of folk art. 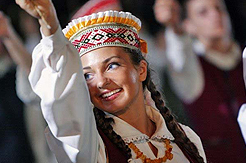 „Šėltinis” perform not only in its local city, but also in the whole country as well as abroad. Dancers of the ensemble often participate in World Lithuanian Dance and Song festivals. The ensemble has been plentifully awarded various prizes and awards.

The ensemble „Šėltinis” has a very rich program, which is often introduced all over the world. Since 1991, Didždvaris gymnasium dancers have constantly been invited to festivals and contests all around the world. Šėtinis has visited the Netherlands, Sweden, Poland, Denmark, Finland, Czech Republic, Greece, Russia, the Ukraine, Spain, The United Kingdom, France, Italy, Latvia. It has also participated in an international exchange program in Sicily. 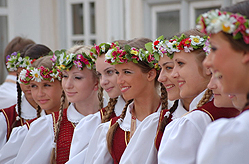 In 1985 „Šėltinis”‘ junior group were announced laureates in the National Song and Dance festival.

In 1987 „Šėltinis”‘ junior and youngster groups were announced laureates in the National Song and Dance students’ festival.

In 1997 „Šėltinis” was awarded an honorary medal by the French Cultural Exchange association.

In 2000 „Šėltinis” group was announced the laureate in the international competition „Circle of Friendship” in Moscow.

In 2001 „Šėltinis” group won the Grand Prix in the international music and dance competition „Fivizzano” in Italy. 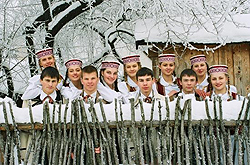 In 2005 „Šėltinis” was awarded a special prize in the international youth folk dance festival „Children for Peace In The World” in Turkey.

In 2008 „Šėltinis”‘ junior group was announced the laureate and the youngster group won the first price in the national folk dance competition „Aguonėlė 2008”.

In 2009 „Šėltinis” were second in the international music and song competition – festival „Festival Internacional de Musica de Cantinogros” in Spain.

In 1985 „Šėltinis”‘ junior group were announced laureates in the National Song and Dance festival.

In 1987 „Šėltinis”‘ junior and youngster groups were announced laureates in the National Song and Dance students’ festival. 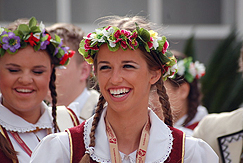 During the friendship events in festivals, „Šėltinis”‘ dancers and choreographers cheerfully introduce Lithuanias’ folk dances, games and national customs to the foreigners. The ensemble willingly learn about other cultures as well. „Šėltinis”‘ dancers are fluent in English, which makes communicating with foreign dancers much easier. Šėltinis is famous not only for its choreography, but also for introducing the ensemble members to national traditions, as well as enhancing their communication skills and stage manners.

We, choreographers, are striving to teach every „Šėltinis”‘ member independence, generosity, courtesy. We make an effort so that during dancing lessons the students develop not only their physical, but also mental abilities.

„Šėltinis” take part in various contests and festivals throughout Lithuania, where they often win prizes. Since 1991, the group has been invited to take part in internationally organized festivals. 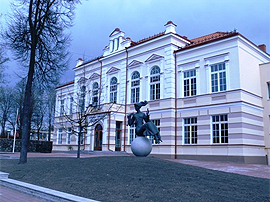